Germany beat France in a spectacular match and bronco

Hanging by the Football It has one of the best games of all time: the Spain World Cup semifinal between France and the Federal Republic of Germany played at the Sanchez Pizjuan in Seville, where the Germans managed to qualify for the fourth final of a world championship after an extension of infarct full of alternatives and a memorable penalty shootout.

Playing a game 8 July 1982 He faced two of the favorites for the title ahead: a France that based on the technique and talent of the great master and Germany Platini, fuerta in his defensive solidity and its main weapons.

The game started well for the Germans, that after warning his shot hits the post went ahead the minute 25 by Pierre Littbarski. But nevertheless, French reaction was immediate and after a continuous siege on the door Toni Schumacher, Dominique Rocheteau was subject to a penalty that would transform Michel Platini.

With a tie break was reached. The second half would come marked by the incident between the French Patrick Battiston and Schumacher. Platini sent a long ball to Battiston, when it was about to reach the leather, he saw hit by the German goalkeeper. While medical staff attended to the unconscious player, Schumacher returned to his goal and began a series of stretching exercises that ignited the minds of the Gauls fans. When Dutch referee Charles Corver decided not to sanction the action of the German goalkeeper, and even granting the lack, French fans erupted against Schumacher, who, since then, He received thunderous boos every time he touched the ball. 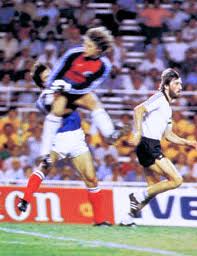 As the game went into extra time approaching, the French went for the jugular of his opponent, and the team of Jupp Derwall was forced to harshly used to repel attacks that threatened to break his defense. In the minute 83, Manuel Amoros crashed the ball in the post, but it was the Germans who disposed of opportunities in the final minutes, by means of Breitner, first, and Forster, later, which they forced to show off Ettori.
With tie 1 It reached a historical and absolutely comparable only extension which had featured twelve years before Germany and Italy itself in the game of the century. They had not even two minutes after, Marius Tresor when his foot slipped after the release of a free kick from the right edge of the area and, since 12 meters, He managed to beat Schumacher (2-1). Germany coach, Jupp Derwall, He wasted no time. He sat Hans-Peter Briegel, exhausted by the effort, and he laid on the grass cazagoles Karl-Heinz Rummenigge.

Just seven minutes after the goal of Tresor, Alain Giresse established the 3-1 with a pitch from the edge area. The combined German and beginning to totter, nothing resume the game, the referee annulled a goal of Klaus Fischer; Under such circumstances any team would have thrown in the towel, but not Germany. When Rummenigge pushed up the 3-2 the net, just before halftime of extra time, it became clear that the party was still alive.

Klaus Fischer was commissioned to restore balance the net, and did so with a great goal. His bike hit the minute 108 It seemed to come out of nowhere and, suddenly, incredibly, the Germans had managed to take the match to penalties.
In the penalty kicks from the 11 metros Alain Giresse French overtook the lead (1-0). The German captain, Manfred Kaltz, He equalized (1-1). Amoros for France, Breitner for Germany and Rocheteau for the Gauls scored their penalties without problems, but the release of Uli Stielike stopped the French keeper Ettori. German defender wept disconsolately on the pitch while his teammates tried to cheer him up. 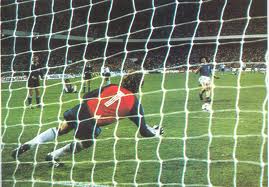 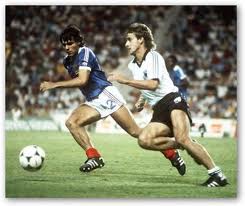 French Didier Six nerves betrayed him. Schumacher's presence seemed to grow more imposing every passing second. Littbarski, Platini and Rummenigge housed the ball in the net before Bossis took over the last penalty for Les Bleus. His shot was soft and Schumacher, he had intuited the direction of the throw, He managed to stop. Everything now depended on Germany.

Horst Hrubesch was in charge of closing the meeting and give the classification to Germany for another final. While the Germans celebrated their victory, the French were crying lying on the grass, with a totally desolate Platini.