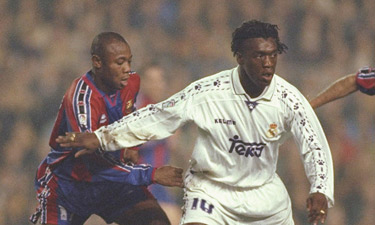 Ran the season 98-99 when Real Madrid and Atletico Madrid faced at the Bernabeu. The whites, with a dream team led by Raul and Pedja Mitjatovic could not with colchoneros. It was then, when he decided to take matters into Clarence Seedorf. The Dutchman took a stratospheric boot release of more than 40 meters which came as a bombshell in the goal of José Francisco Molina.

It was not enough to give victory to Real Madrid, but to give great joy to the merengue parish. The shot had everything. Power, placement, beauty, and of course, the company by a superclass: Clarence Seedorf.

Stoichkov was suspended six months for a pisotón
Kubala and Di Stefano: the tandem could be possible
Fury was born in Antwerp
The biggest win in the history of the League
The tragic story of Jean Pierre Adams
Five players who excelled in the Spanish League during the 90
Panenka invented his penalty
Maradona and Messi marked the same goal
El Piojo Lopez, one legend valencianista
João Saldanha was the creator of Brazil 70