France: in search of the lost glory

France is one of the largest selections of recent football history. finalist in 2 of the latest world appears in Brazil as covered. Nobody thinks that the Gauls can not even resemble that team led by Zinedine Zidane. champion 1998, which also he served as host and finalist in Germany 2006, when only Italy managed to unhinge the French and beat them in a fateful penalty shootout. A party that will be remembered forever by the head of Zidane to Materrazzi in the last game as a player French captain.

The debacle in South Africa 2010 It meant the relay on the bench. They were eliminated at the first hurdle, as last Group A with just one point scored in three games. Following that were important changes to federal and institutional levels, to which of course was joined by the relay on the bench. Lauren Blanc took over the team with the sole purpose of rescuing him from the depths of the underworld.

Without making a football dream came to quarterfinals at Euro Ukraine 2012, where they suffered the storm of the best selection in recent years, Spain that a posteriori champion would proclaim. In qualifying for Brazil 2014 They will again see the faces. Both as clear favorites to occupy the first place in group. Didier Deschamps with the bench and in direct confrontations would dictate which of them should go to the play-offs to seal their classification, and finally the Gauls would face Ukraine in the revalidation. Eliminator that they would really complicated when losing in Kiev 2-0. Even so, France regained the winning spirit, and even combative warrior and managed to trace the tie.

All forecasts pointed to France would be framed in a terrible group. It was not seeded, but was helped by a controversial decision that FIFA few hours before the draw. The final result? group E, Switzerland (seeded weaker in theory), Ecuador and Honduras. They are almost round, but should not be relied view the recent history of Ribéry, Benzema and company. 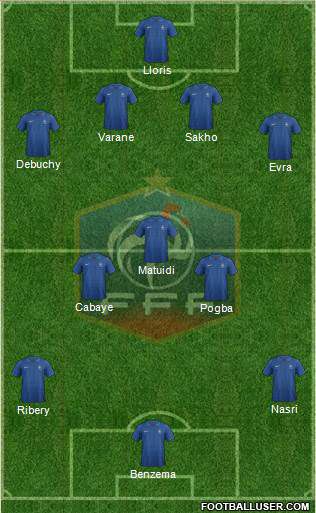 France captain doublet, Didier Deschamps took over the team after Euro Ukraine 2012. If Bleus lacks a leader on the field, on the contrary if you have on the bench. A gifted coach character and personality. Director for 5 seasons Monaco lost the final of the Champions 2003.

In 2006 He took over Juventus punished for corruption to play in Serie B and 9 points less. The returned to Serie A after being champion nevertheless B. In 2010 Olympique Marseille proclaimed champion of Ligue 1, title that failed for some 18 years. Didier Deschamps a very charismatic and strong moral principles that wants to return to his country at the epicenter of world football person.

History:
In 2013 after winning the World Under-20 became the first country in the world to win all male FIFA competitions for teams of eleven players (world Cup, Olympic Football Tournament, Confederations Cup, World U-20 and U-17), besides having also he won at least one occasion the absolute Euro, sub-21, sub-19 y sub-17.