Colorín colorado another Premier is over. Turns out that was the color that dominated throughout the year but the competition final, red turned light blue. Manchester City and Liverpool kept a fateful fight for the Premier League until the last day, scoring both more than 100 goals. The final regularity and the good game offered by the Citizens meant the title for the fourth time in its history and second in the last three years..

Rodgers's men who dazzled Europe with their colorful and vertical football throughout the season, they suffered a significant drop in the last games and saw how the possibility of breaking the longest drought in their history vanished in the most cruel way, 24 years add up without winning the Premier. In this way, Chilean Pellegrini's team, the only one capable of keeping Anfield's trail until the end, champion was proclaimed taking advantage of Liverpool's final punctures.

A) Yes, Mauricio Pellegrini writes his name in the history of the Premier League as the first non-European coach to become champion. They will be accompanied in the top continental competition next year by Chelsea de "Mou" and Arsenal, although the latter will have to play the preliminary phase.

In the month of August the competition began and it did so with a wide range of favorites and a lot of morbid. Mourinho's return to the "blue" bench, the signing of Pellegrini for City and the farewell of Sir Alex Ferguson after a lifetime at Manchester United. Three teams that at that time were clear favorites along with Arsenal and Liverpool. But nevertheless, it was the latter that started like a rocket.

Those of Wegner could not hold out with the best until the end, more when City and Chelsea began to sing Sunday after Sunday. Finally, the other Liverpool team, Spanish Roberto Martínez's Everton came close to stealing fourth place after a really good year. They were the revelation team of the championship, although we cannot forget the great year also made by Southampton, with Pochettino to send. Another London team, The Tottenham Hotspur, will accompany Everton in the Europe League.

Unfortunately, failure goes hand in hand with success.. The joys of some become sorrows for others, and in this case Fulham, Cardiff and Norwich are the teams that have not been able to achieve permanence.

Eleven ideal of the Premier for Colgadosporelfutbol: 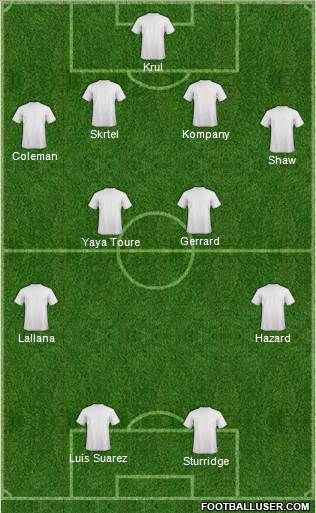 They must start a new era as soon as possible:

With total security we can endorse this qualifier to Manchester United. A team full of stars that saw in David Moyes the replacement for the great Alex Ferguson. The expectations created, the responsibility of replacing the best and inexperience in big clubs, surpassed the ex Everton manager.

Manchester United started with doubts to end the year in a total spin. Without knowing what to play and in no man's land in the classification, David Moyes was dismissed in the final stretch of the season and the board left the team in the hands of the legendary Welshman Ryan Giggs who did the work of coach-player until the end of the campaign. A year to forget at Old Trafford.

Regarding proper names, there are several who have not lived up to what was expected of them; Soldier, Fellaini, Negredo, Eto´o, Lamela or Mourinho could be the greatest exponents of failure this year in the Premier League.

They must start a new era as soon as possible:

Undoubtedly, this honor must go to Everton. A team well worked by their coach Roberto Martínez. The quick adaptation to the club by him, and the ease to assimilate Spanish football by the players have been key in the future of the season. A team that put the great teams of the championship on the ropes and was about to sneak into the Champions League with its lucid attacking game and defensive seriousness worthy of the great teams.

There are several that could be found here, but without naming great stars like Luis Suarez, Hazard o Yaya Toure, we can name soccer players like; Lovren, Lallana, Jay Rodriguez and Lambert (Southampton), Wilfred Bony(Swansea), Barckley y Coleman(Everton), Sterling (Liverpool), and coaches like Brendan Rodgers or Roberto Martínez.

With the championship decided and the season over, It's time to enjoy the long-awaited vacation, although in some cases they are more deserved than in others. Anyway, the vast majority will return in July with their teams to start another season with enthusiasm and new batteries. Meanwhile, do not forget, football does not stop and less in "Colgados". The World Cup is just around the corner and stars from every corner of the planet meet in Brazil. The holidays for them will still have to wait.

PD: We leave you the summary of the cartoon premiere.