The big lies and hoaxes football They are unfortunately too common. There is a tendency on the part of the European press and especially Spanish inventing news for nothing are. Hearsay, speculation but no credibility, There are many false reports appearing in the media and that eventually are exposed. particularly striking, It is the case of summer signings, where everything seems worth. Here, we leave a series of hoaxes or lies, that ye may prove not always that you read the daily reports: sometimes, it misinform.

And they stayed the same. The cover was sugarcane but never fulfilled

The cover has two stories that never fulfilled. The first unfortunately for the Catalans is that Mathieu if finished in Barcelona. The second is that Valencia was not the one who signed Oblak but it was Atletico Madrid

The cover is not lost. as you know, Dutch ended up playing for Real Madrid and not in Barcelona

Mundo Deportivo said unabashedly that had already signed Isco and robbing the player to his eternal rival. Something that did not happen and renovated malagueño white.

Mark had no trouble assume that it was the Barcelona Bale. 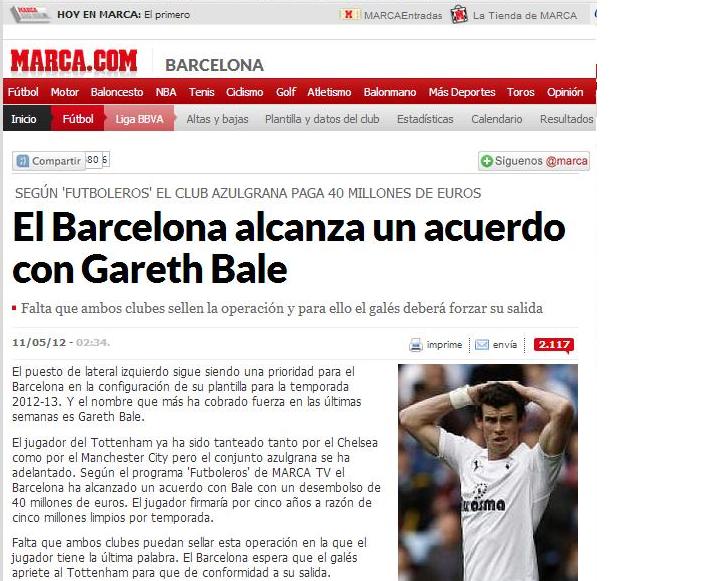 It does not matter whether daily, everyone has their thing. Sport this curious story invented. Llorente ended in Juventus

Silva was Real Madrid player. The man who was masterminding Mourinho and his. The canary player never Chamartin because he preferred the British Isles.

Resultados-futbol.com gave in his day made the signing of Rossi by the Barcelona. But nevertheless, transalpine'd pack Florence and later would play in Levante and Celta.

Neymar could not complete 2011 Real Madrid. He joined two years later, in 2013, by the eternal rival FC Barcelona where he stayed until 2017 when the PSG broke the record of history with his move 222 millions of euros

Villa is another who visited the sports press another team stating flatly fu signing to play for Real Madrid. Something that never happened

A nice, hearsay…so necessary to sell.