Betis 2- Levante 0: Betis takes the duel for the Champions

The Sunday morning showed us a top-flight match between two teams from the top of the table, between two of the best teams in the league today. Two teams with many homegrown players in their eleven true.

The Benito Villamarin was the venue chosen to host the match between Real Betis and Levante UD, fifth to sixth before starting the day. Two teams that promised a high-level match. Betis they missed Beñat, Levante Vicente Iborra and Obafemi Martis it would not start the game.

The party would start soon to give emotions. In the minute 7 Betis was to strike a blow on the table. In a keynote address to an output of a corner in favor of Levante backlash and after a great combination between Jorge Molina three touches, Ruben Castro and Joel Campbell and that the latter was going to finish the play beating by low to Munúa. 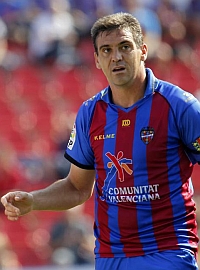 Levante was not going to give up so easily. In the minute 21 a spectacular play between El Zhar and Ruben would kill a duel between the young squad and Adrian granota Betis goalkeeper who would end with a great stop on this last.

The match was dynamic, with both teams trying to reach the opposite goal but without specifying any play. But highlighting the end bético, Costa Rica's Joel Campbell showing its verticality and quality. In the minute 45 The first half ended without any minute off a first half played at a frantic pace.

The second part would begin with a tremendous shock, Pape Diop Levante midfielder Ko was going to stay for a few seconds after a blow to the head in a jump for the ball that seemed to have consequences. Luckily the Senegalese would recover after the intervention of doctors.

In the minute 12, Roger would forgive the tie again for Levante, Martins after assistance would be unable to score from close range with the goal of Betis, on the second occasion Clarisima. Betis put the ball and the game and chances granotas.

In the minute 18 Ruben Castro would mark somewhat beautiful invoice. A extrordinario oriented control and a shot hit the left post of Munúa. goal and 2-0 for Betis.

With the score in favor, Champions ranked position and spurred by his public Betis began to like with long possessions and precious game.

At the end of the match, Ruben Castro would forgive failing a resounding third goal and almost finished off the shinguard sending the ball into the corner after a great solo run in Agra.

At the end Betis cat water is carried and placed fourth, Levante down to eighth place but still with all its options to fight for Europe.