Greece, Another miracle is possible?

The Charisteas are gone, the Nikopolidis and company that were crowned European champions in the 2004 but in any case it would be better not to trust Greece. Why? Because they play the usual, they are unpredictable, it seems that they are not and then they always appear when they are least expected. It is true that the World Cup is another story, that in their only two participations they fell to the first exchange rate, but still, caution.

Caution because Greece arrives after eliminating Romania in the playoffs and because it has an interesting block. It is a firm team in defense, who knows perfectly what to play and that on top of that he has a goal in Mitroglou's figure, the exalted striker recently signed by Fulham, is capable of solving countless matches by itself. Salpingidis, Samaras complement a trident that can complicate anyone and even more so in a group where neither Japan nor Ivory Coast nor Colombia stand out for their defensive strength.

It is difficult to know where Greece will go. The Hellenes do not start as seeded but it will be difficult to defeat them and not at all unreasonable to think that they can qualify for the round of 16. Fernando Santos knows and knows international football and knows that the experience and youth that Greece combines pays dearly for these events.

Bosnia dropped them to second place in their qualifying group and in recent matches, especially against Korea, he has not given his best. But a World Cup changes everything and if once they could do the impossible to win a Eurocup, why not try in a World Cup to reach high heights. 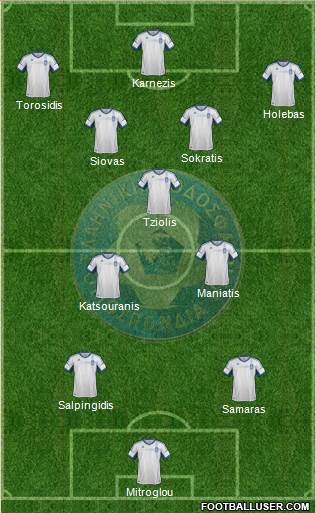 Fernando Santos is the coach of Greece. Although for many it is an unknown, the truth is that the Portuguese coach is a perfect connoisseur of Hellenic football. Paok, Panathinaikos, AEK have been led by him. A man who bets on defensive rigor and fast ball delivery. Some weapons, that curiously, Greece knows better than anyone.

He began his football career in Portugal where he also began his career on the benches, leading the best Portuguese teams. But nevertheless, the passage of time made him change of scene and go to the other end of southern Europe where he seems well-off and adapted to a thousand wonders.

– Two participations in the Olympic Games without going beyond the first phase.