Vinnie Jones was one of the toughest guys in football history

Hanged for football he wants to bring the toughest guys in football history. Players who collect actions entusiasmarían lovers Chuck Norris movies and make good phrase: "" Football is a sport of gentlemen played by hooligans

This Italian player of the decade of the 90's militated among others in both Turin and distributed teams wax, much wax. In 16 year career he accumulated 50 match ban. He became famous for handing out especially for its art from elbowing and faces. The reason was always the same, as this phenomenon had caused him. A really tough guy and one of the most cunning players who have been on the lawn of Italian stadiums 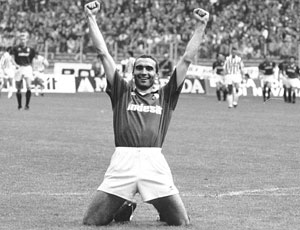 Pasquale Bruno, 50 sanctions behind him

Another Italian is part of this list of artists to distribute anything but candy, although this if they know all the public, especially for its grisly tickets. We speak as Materazzi, a real leg part. Known for their aggression, black arts, his painting of a member of a street gang and its brutal entries, Marco Materazzi, more is known worldwide for its ability to deliver that for his skill with the ball.

Our protagonist in the cover photo for this article, the British Vinnie Jones, It was a really tough guy on the lawn. He played defensive midfielder where he patented a very peculiar style of play, where his maxim was that if passed the ball, no man passed.

Surpassing the line many times throughout his career, Vinnie exhibited a recital of intimidation, black arts, violent inputs or various provocations. Aided by his bouncer plant, tricks had to write a manual on underground game.

Now he is an actor and plays roles of bully and tough guy, something like what he did when he was a football player. A full-fledged character.

Dr. as they called it was a classic game Subway. The Spanish, It was a calm guy off the field but dangerous on grass. It has distributed more fuel during his career a timber factory. Surprising that often come out with virtual impunity. Wild tickets of all types and colors, It was the typical player that every fan on your computer rather than against.

Companion and apprentice behind Sevilla Pablo Alfaro. Valencia went fogueando with his partner from whom he learned some of his worst arts but even potentiated.

Not only he gave right and left for a long time but was about to kill a rival on the field. In 2005, He slammed his elbow into the neck of the Venezuelan Juan Arango, life being about to cost the good player, at that time in Mallorca. It was the only unsportsmanlike action of this defense, but if the wilder. The images went around the world. 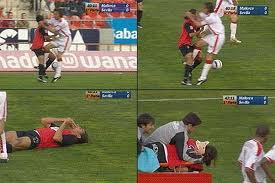 This action Javi Navarro nearly cost the life of Arango

Brazilian-Portuguese defender Real Madrid is a very volatile type. That is something that the general public knows. The kick Casquero on the floor was just the tip of the iceberg. kicks, abuse, slapping, the good defense of Madrid will go head very easily what has caused him excessive polemics.

can not even name the list of barbarities he has done and continues to do on the field. Intolerable attitude.

He came to injure an opponent after a savage challenge and recognize that he had been aposta. The injured player had to leave football practice. Great player who lost a lot when he went head, which it was often.

Basque Clemente was assistant in the Spanish national team and coach Sub 21. Before the extension was Barakaldo on the field. dubbed “Butcher of Bilbao” for ease sectioning ankles, Maradona was injured in such criminal entry that even three decades later is remembered.

Before he had done with Bernd Schuster also seriously injured. A careful logs of who played in the Spanish national team several world. It was another time and another football clearly.

The current central Levante has an innate facility to drop your elbows or fist. During his time at Valencia he struck punched Burdisso following a Champions League match. Then I had to run to avoid being hunted the Nerazzurri players.

With Levante again fall prey to the tabloids after opening the eyebrow Cristiano Ronaldo in a play which seems unintentional but it is difficult to assess. Shortly after he poked another nudge Sapunaru, Zaragoza player, that is not no saint because it is the player who has broken the record of warnings in a season. Anyway Valencia is a temperamental player

The last of David Navarro. The receiver is Sapunaru, player who has broken the record of warnings in a season

The Colombian has nothing more and nothing less than the dubious record of having far exceeded the 40 red cards, and we say so far because it is still active.

It is one of the most aggressive players who have been in the history of international football and the most cunning of Colombian soccer. His last red was a gem. He stepped on the head of an opponent on the floor. A guy whose attitude on the pitch is intolerable. 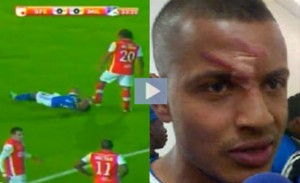 This is the last jewel of Bedoya. Colombian exceeds 40 expulsions

L'Enfant Terrible was such a great guy as irascible and bad milk on grass. spittle, abuse, manga cuts and completion. He gave a flying kick at a fan who berated him 1995 after being expelled. It is now an actor Vinnie Jones occasionally as.

Known as superlópez, was one of the best known ankles bites 90s. A player guy who liked the then coach of Spain, Javier Clemente who made her international.

Remembered that action in which he broke his nose Luis Enrique in the World 1994, the truth is that the black arts were common in the Italian game over his career.

The kick in the chest to Jean Claude Van Damme that gave the Spanish Xavi Alonso during the World Cup final 2010 and merit serious enough to enter this list, but that sadly is not the only. habitual dishing, his own coach had to give rest to be focused. A really tough player. 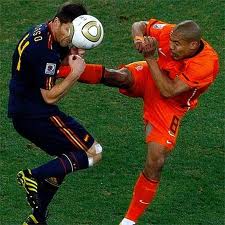 This kick Nigel De Jong to Xabi Alonso made history. The referee Howard Webbs not expelled

We could not allow ourselves to this irascible and controversial Bulgarian. Hristo Stoichkov referee stepped on a early 90's, which it costs him a major penalty. It was discutidor, provocative, marrullero and fractious, almost on par with the great technical quality treasured. With a face walking in a bad mood all day, the great Hristo, he delighted fans with the ball and was the bane of the referees of the time.

Other players who have made merits to be on this list could be:

Players who played in Boca and River
Spanish cities with two or more professional teams
The best strikers in the history of Real Madrid
Top scorers of the German team, Italian, French, Brazilian, Argentina...
The player who went from scorer in South America rocker
The most valuable players in the market
The best teams in Mexico
Footballers when they had hair, if not and vice versa
What are the most important changes that the football regulations have had?
Bolivia tried to summon a French player for a mistake with "football Manager"