Barça defender Carles Puyol will be out for at least four to six weeks due to a stretch of the posterior cruciate ligament in his left knee that occurred during the game that his team played against Getafe (1-4). 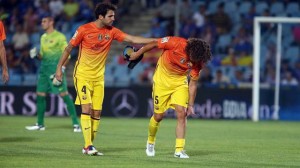 The Barça defender, However, will undergo further tests on Sunday in Barcelona to determine the extent of the ailment and the time of absence, as reported by the club spokesman Jose Manuel Lázaro.

Puyol, who reappeared in the match played at the Alfonso Pérez Coliseum after a few weeks of absence due to a broken cheekbone, He was replaced at the beginning of the second half by Argentine Javier Mascherano, after the injury occurred in an action with an opponent