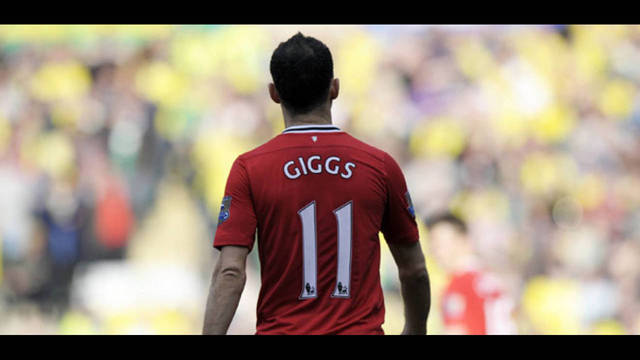 Ryan Giggs, one of the greatest exponents of the One Club Man. PHOTO: Youtube

It ended after 23 years to the foot of the canyon. Ryan Giggs said goodbye to the “Theater of Dreams” the 6 May 2014. Old Trafford fired one of the greatest players in its history, to the man who for 24 seasons defended the shirt of the Red Devils and has even come to lead them from the bench. A player more laureate of history, to the man who from 1991 a 2014 he won almost everything as a player from the United.

When you read palmares of Ryan Giggs will usually get chills: 13 English leagues, 4 FA Cup, 8 Community Shield, 2 Champions League, 1 Intercontinental, 1 European Super Cup, 1 Mundialito Clubs, 15 Welsh goals, more matches played at club level (910), not a single expulsion throughout his career, and he has scored once in every season he has played since 1991 least in the last, oldest player to score a Champions both (37 years), At the olympic games (38) and so we could continue to write pages and pages… 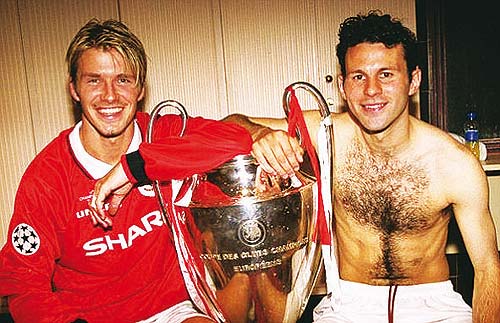 Beckham, Giggs y “the Orejona” won in that final mythical 1999.

And this player born in Cardiff 1973 It represents the speed, overflow and quick and fast game par excellence. Son of rugby player in black (his grandfather was from Sierra Leone) and completely white mother, Giggs spent his childhood in his hometown until six years his father was transferred to Manchester to play for his hometown team.

One major change that initially did not assimilate well because of the remoteness of their grandparents, but eventually it proved decisive. And it was so, because with 14 years, Alex Fergusson had his eye and had signed to the lower echelons of the United. A step which ratified 1990, when with only 17 years signed his first professional contract to join the first team.

On arrival at the first team he revolutionized the template. Giggs was a southpaw with a devilish speed external (possibly he inherited from his father physical genes) and a power outsized. His departure from positions lopsided was feared by rivals, because at that speed and dribbling class also aunaba, much Dodge. This made him become an unstoppable player. To top it was accompanied by some fellow Cantona level, Beckham, Scholes, Schmeichel, the Neville brothers or posteriomente, in the XXI century as Van Nistelrooy superclasses, Cristiano Ronaldo o Wayne Rooney. 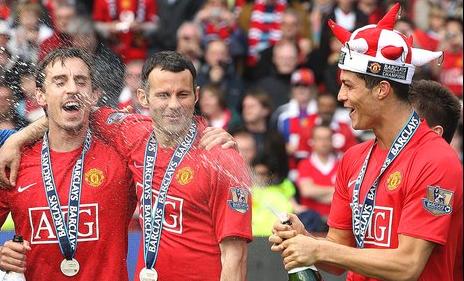 Ryan Giggs and Phil Neville with a young Christian.

With those ingredients Giggs's career soon explode. In 1993, He added his first Premier League in the new release of the English league format. Alex Ferguson with care of it (He left not do interviews until age 20 years), Giggs was a key player in the following three leagues conquered within 4 years. To the point that many compared with the great George Best.

A titles Giggs also scored goals and achieved great goals like against Arsenal in extra time in the replay of the FA Cup semfinales of 1999. A goal that went around the world and confirmed the kind of player who was inside the body of the Welsh. It is considered the best of both the history of the FA Cup.

But its great moment would be a year before, when you achieve the famous triplet (League, Cup and Champions) after a European Cup Manchester Bayern snatch at the last minute. A high point in the career of Giggs, which however he did not quite achieve classify Welsh for the finals of any competition.

In the middle of the first decade of the new millennium, Giggs game underwent a transformation, leaving its end position by the inner and mediocentro. His age and the gradual loss of speed made him go to a position that would show his extraordinary vision of game. And that's good, It is good anywhere. 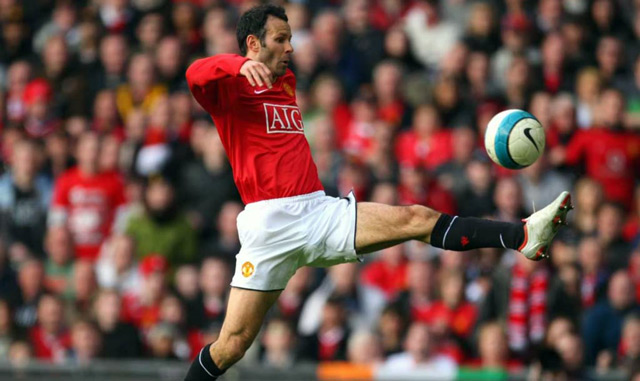 Ryan Giggs football was changing at the beginning of the new century.

Her good work allowed Manchester to win three league titles in a row and another Champions, accomplished “in extremis” against Chelsea on penalties. The passage of time and his loyalty to the team of his life allowed him to accumulate record after record and leave the bar very high for those arriving.

Despite its excellent track sports, his love life suffered a hard stick when 2011 two scandals were uncovered: alleged infidelity with model Imogen Thomas, and subsequently, another hoax, this time with the wife of his brother: Natasha Giggs who was sharing the bed sporadically for eight years and whom he met at a party with his own brother Rhodri. 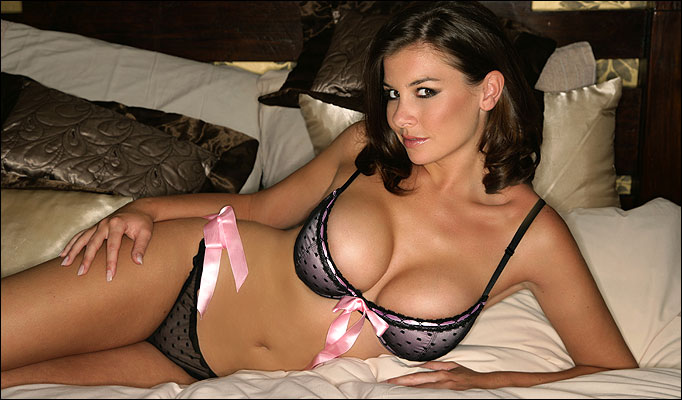 Imogen Thomas had an affair with Giggs which cost a family disgust.

An event that caused his own father as saying life would never be the same for the family. And for Giggs, was never distances, inside or outside the pitch. Giggs, a crack. Finally, night of the 6 May 2014, the Welsh, He was dismissed from his audience which was. He did as player-coach, changing itself the minute 70 party and being about to close his career in the theater of dreams with a real goal. It could not be but Ryan Giggs path will always be there. A player, already he blunted at the highest level while some still living our childhood. 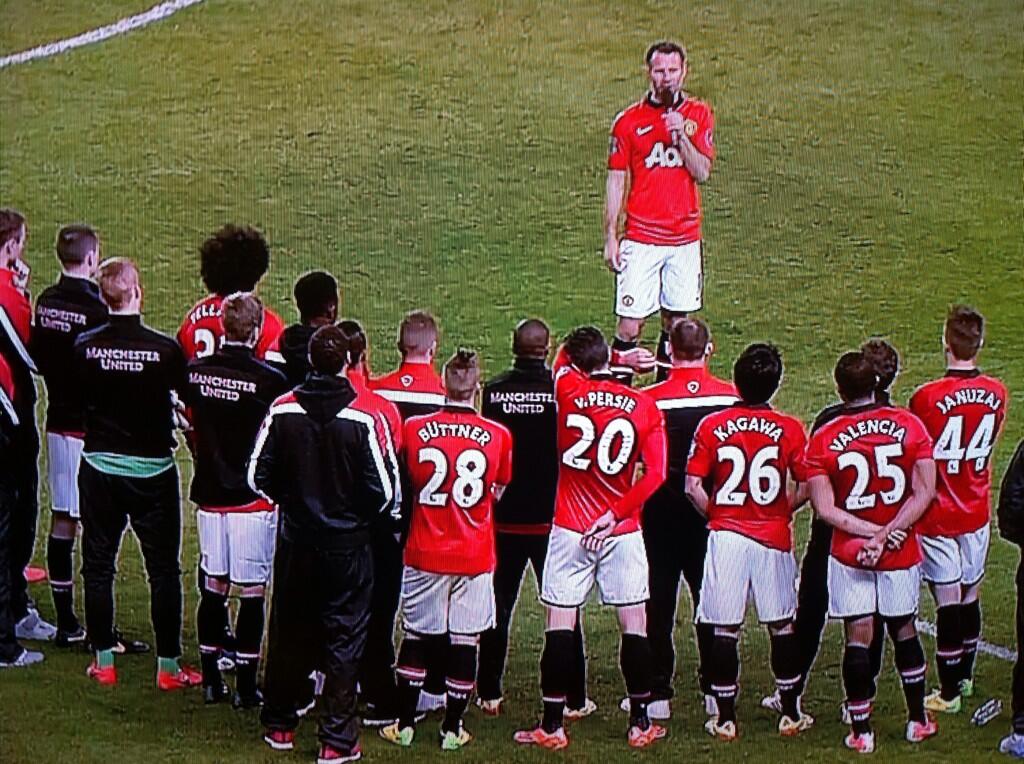 Moment when Ryan Giggs says goodbye to Old Trafford after 24 seasons and numerous titles. He does as player-coach of the club.

Rubi finally gafe above is removed
The three worst goalkeepers in the history of Hercules Alicante
The historical palmares of Euro
Croatia, Talent without organization
Footballers problems with justice in Mexico
Players who played in Boca and River
The most interesting free players that are on the market
Gabriel Omar Batistuta, "Batigol"
The five largest in Argentina
Cities with more elite teams