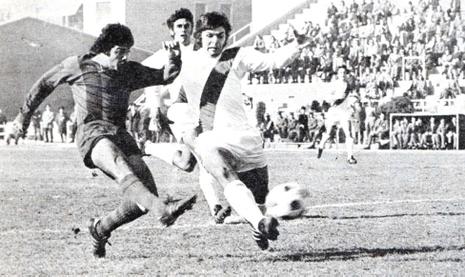 Can you imagine a world today superclass playing in Second or Second B? For the Levante succeeded in 70 with the signing of Carlos Caszely. A story that tells how they could get to do things once, without much technology. While, the situation for the argument would somehow endearing film Paco Martinez Soria or inimitable Juanito Navarro Y Antonio Ozores, all of them already disappeared.

We want to talk about a different kind, an icon on and off the field, a man who in his country is highly respected, a man who came to Spain, to play in Second division, on a computer also very special because of its characteristics.

Born in Chile 5 July 1950, Caszely, with Hungarian distant ancestors , played for Colo-Colo when in summer 1973, his team toured Spain, specifically for Valencia. Then an intermediate players of the time it informed the secretary of Levante, that was an excellent player 23 years.

They went to see him play in Alicante and decided that player could not escape. Granota team, He would participate in the Second Division of the time and his signing, It could be the less media, as it was a Chilean international renown.

But the operation of his move was not easy, as it had already disappeared Ramón Victoria, Levante legendary leader of the 70's, in his book: I got up and. Don Ramon had, Levante contacted the player and the club but without concrete. Colo-Colo, He marched to the Soviet Union, to continue their tour.

The signing in the style “SPAIN Cani”

Granota president of the time, Grau Manuel Torralba and management Vinaixa, They decided to follow him on tour with intent to tie him up and bring it to Valencia, overhand announcing the trip and raising the logical expectation. They had to come to Moscow, via Paris, but they lacked the Franco dictatorship and the Communist regime of the Soviet Union did not get along very well at that time, so they were denied visas and had to stay in Paris.

The two executives, in such a situation, They had to improvise a ruse which Spanish picaresque film of the time, because they could not return empty, without the Chilean star. They decided to stay in Paris with his French, somewhat limited, follow the chronicles of the Chilean press tour of the neighboring country.

Thus, Spain reports passed by as if they were in Moscow while they were touring the city of the Eiffel Tower. They were obviously other times. So at the end of the tour by Soviet lands, the crossing was closed in Paris 10 million pesetas and a friendly game at the stadium of Levante, the team won granota 2-0 and in which Caszely even played for Colo-Colo.

The player only had one condition, which is not incorporated until two assumptions are met: his marriage to his wife and qualifying match for the World Cup 74. In this second, Chile was ranked after the resignation of the Soviet Union to play the second leg at Santiago by the coup of General Pinochet, character who incidentally also would bring headaches to our protagonist and which have their pluses and minuses.

Caszely was a renowned player when he arrived at Levante

Chilean star, he played that season, the 73-74 with Levante, reaching the summit, when he alone he scored four goals Rayo Vallecano, in the old field where he played the classic Madrid team. Levante despite all, and descended to Third Caszely was transferred to Espanyol of Barcelona 25 million pesetas, where he continued his career.

Then he had political problems for opposing the Pinochet regime, which he had consequences for their families, since her mother was kidnapped and tortured by the regime and even was removed from selection. He was able to deny the greeting dictator and that he caused serious problems. A different type, a great guy.