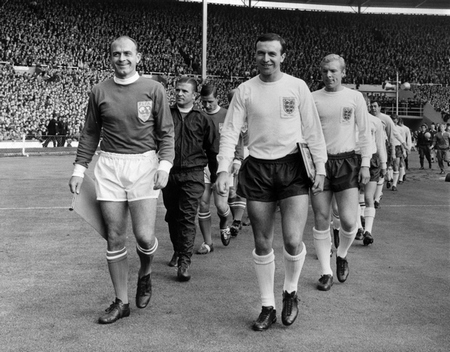 Football picks hung by the time machine and relive those famous friendly matches that raised blisters around the globe. The famous duels between powerful national teams and the rest of the world combined, or going beyond, a confrontation 31 October 1973 Europe-America staged at Camp Nou.

Voracity today, an increasingly tight schedule leaves little time for such distant and interesting initiatives like these. Why not who would like to have for once on the same team Cristiano Ronaldo, Messi and Ibrahimovic against Spain or Brazil for example? Well, that now seems so remote was something not often but at least sporadic at other times.

One of those friendly crashes more depth and relevance for the quality of the opponents is the already mentioned duel Europe-America. A quote in style but with little input (15.000 viewers) held in Barcelona which was the best of the two footballing continent par excellence. On the European side ,figures were Johan Cruyff level, Franz Beckenbauer, Juan Sol or Eusebio. On the American side (more specifically American), They walked talents Cubillas, Sotil, Rivelino, Brindisi, Fernando Morena and Hector Chumpitaz, the man who scored the final 4-4 with which he ended the game '(America would win on penalties) and that would be gained following hence the nickname “captain America”, not in vain exercised such condition.

Whatever the outcome it was nice to see a magical trio together as Eusebio, Cruyff or Beckenbauer to delight viewers and see what combination was better. An interesting initiative and one that has pitted the two continents, although there have been similar events under other names.

England played against a combined example of the rest of the world to commemorate the centenary of football in the years 60 except where Pelé (Santos did not want to send if it was injured) and Rivera were the best of the best on the planet with Yashin (USSR), Soskic (Yugoslavia), Djalma Santos (Brazil), Eyzaguirre (Chile), Popluhar, Pluskal s Masopust (Czechoslovakia), Schnellinger y Uwe Seeler (Germany), In total (France), Baxter y Law (Scotland), Eusebio (Portugal) and Di Stéfano Madridistas, Puskas and Gento.

It was not the only example. Brazil also did, and in the years 80 Y 90 there were several encounters more of such caliber. In 1990, a 22 February in Tokyo appointment players were given the likes of Platini, Socrates, Butragueño, Michel, Rummeningge, Plaff, Kempes or Maradona himself as a prelude to the World Cup in Italy 90.

Something that would be repeated in 1992, in 1995 O 1997 and it would have the pleasure of the best players of those times. And is that until the season 98-99 It was normal that every so often the stars of the moment to get together on the same football field. But nevertheless, lack of competitiveness and “absence of a true official title” They ended up taking its toll on this initiative, that despite, level marketing itself could be optimal today.

Who would win today?

One of the biggest questions is who would win today if they were playing against America or Europe who has the best players throughout history. Surely, the first thing nobody will know if you do not play again. The second is even more complicated to solve. Both continents have always provided the best of the best, although with different characteristics in general (we must have some logical exceptions). European players often or have been stronger standard, faster and better tactically. The most creative South American, more technical and better ball-striking.

Either way, What is clear is that here we leave those could be the initial onces from one continent and another, both present and history. Dynamite in both sets. Luxury for amateur. 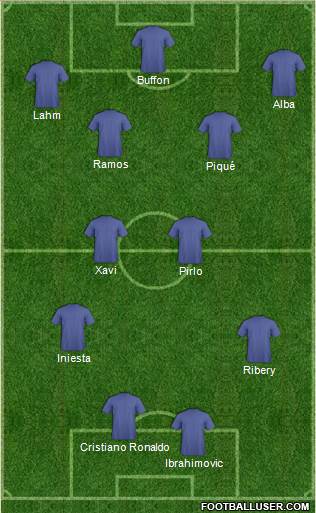 Van Persie, Robben, Xavi Alonso, Casillas would be a bench where Mourinho could be the coach. 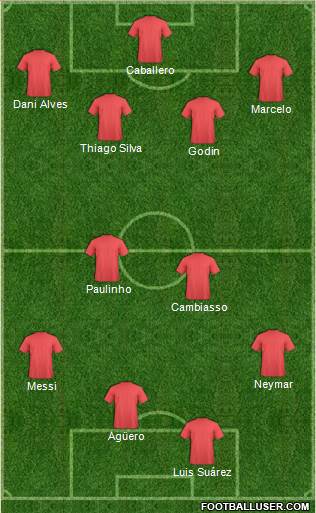 Marcelo Bielsa and Tata Martino could have alternate Sailing, Higuaín, Tevez the Cavani. 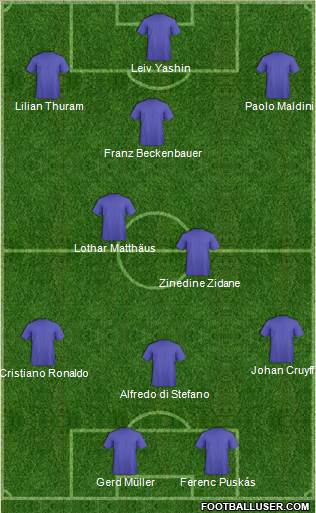 The best team in the history of Europe would have an American: Of Stefano. 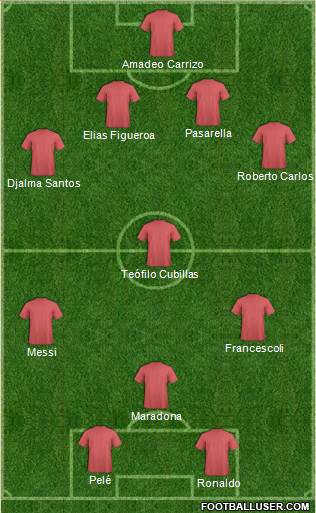 Romario, Rivaldo, Socrates or Chilavert would have no place in a great team at this level.