Costa Rica, the “harness” stronger than it looks

Costa Rica appears as covered in group D. Quietly, the “tica” team was second in the Hexagonal ahead of Mexico and with a solid football with hardly any cracks. Costa Rica is not a selection full of figures or players who make a difference, but neither is it the expert in candy that can be boasted.

Without losing a single match in qualifying to Brazil at home, the World Cup will be something else, more with Italy, Uruguay and England as travel companions. Bolaños, Campbell, Keylor Navas or Bryan Ruíz are no longer those Costa Ricans who reached the eighth in 1990 starting from nowhere. Many of them consecrated in Europe, nobody gives a penny for it and it will be difficult to see them in the eighths again. But nevertheless, Surely some of the big ones will choke and can be a judge for one of the toughest groups in the history of the World Cup.

Costa Rica will bet on a safe block in defense, sober, with good ball handling when possible and with the counter as the maximum argument. Speed ​​down the bands, Arrival in the second line will be the main traces of a team that will try to fly as high as possible.

– Keylor Navas. One of the most valued goalkeepers in the Liga BBVA. Great reflexes, in Levante he has established himself as one of the best goalkeepers in Europe this season. In the world Cup, will try to follow this line.

– Bryan Ruíz. The outstanding Fulham player is capable of solving a match at a certain time. But nevertheless, as irregular as great, It will be a mystery to know which version of him we will meet. Even so, pay attention to him.

– The draw. Framing in a group with three world champions, anything that is even scoring will be a surprise. Passing the phase would be one of the biggest surprises of the tournament.

– Low performance away from home. Solid as local, However, it was completely low because it is a team that suffers when attacking away from the fervor of its public.

– Except Bryan Ruíz, no big stars. There are players of a good level, but not true stars that can decant an even match. And this in a World Cup, it is paid and very expensive before powers that do have them. 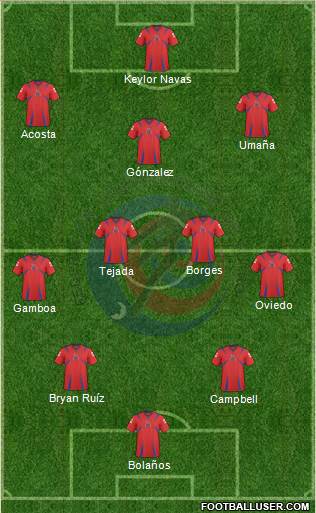 Jorge Luis Pinto lives his second stage at the helm of Costa Rica. This historic Colombian coach who has led dozens of teams in his long career already served as a "Tico" coach in 2004-2005, where he classified the Central American team third in the Hexagonal road to Germany 2006. But nevertheless, at that time he did not play the final phase.

Now, with three years already back on the bench in Costa Rica, has the mission of directing it in the World Cup. No pressure, his football against him will try to fish in the troubled river that will be group D with Uruguay, Italy and England. Of course, It will not be easy to even fight these three powers, but neither can it be ruled out that it is capable of obtaining a positive result that reduces the options of one selection to the detriment of another.

One thought on “Costa Rica, the “harness” stronger than it looks”

Coaches who returned to Real Madrid

The players with the most curious names

Barça's golden age seems to have come to an end

When the players were normal types, as your neighbor

Footballers with a shocking personal story behind their success

Pepe denounced for punching in the jaw

A summer full of bombings at zero cost

The Chilean footballers who have worn the FC Barcelona shirt

Gai Assulin, the new Messi who stayed on the road