Ecuador, face the greatest challenge in its history

Drawn in Group E alongside the emerging Switzerland and France always respected appears Ecuador. The Tricolor go to Brazil to play his third World Cup and he does with his feet on the ground but knowing that it is possible to emulate the role of Germany 2006, When they reached the second round. Because if, France is superior on paper, but in the last year and a half or so they were Portugal and Uruguay both fell. The same could be said of Argentina, unable to win in a competitive match in Quito.

Ecuador is a stronger selection of what may seem. With physical and fast men who can play against, but they have a plan B at the touch and possession. The “Tri” Enjoy with the ball and especially, with a powerful and strong front will be a headache for anyone. Sadly already died “Mutt” Benitez, nevertheless remains, Ecuador having the best in his line of attack: Valencia and Caicedo are two pillars that already wanted for example, have France.

Good news for the attack and consistent means of the field but suffering away from home. It is the most serious problem of Tri. Ecuador did not win an official match away throughout qualifying and there are many who think outside the altitude of Quito, group suffers Reinaldo Rueda.

The South Americans have decided to strongly prepare for Brazil. England, Holland and Mexico will be among the rivals to put the machinery ready “Tri”. A World demands it, more when luck for Ecuadorians to have a more interesting batch of players willing to go further than ever. 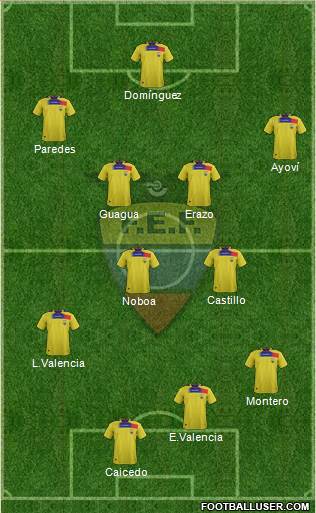 Reinaldo Rueda will be the third man charged with directing the destinies of Ecuador in a World Cup. Colombian 56 years experience in the position of coach of Colombia, the hype wanted that faces Honduras, their former country and which led them to 2010, when she signed by “Tri”.

Wheel is a touch football lover, but this time, also known in Ecuador must impose his strong character and his feisty temperament. Reinaldo never sees nothing impossible and perhaps that, is the great virtue that makes their team strong.

– 2 fourth times in the Copa America.