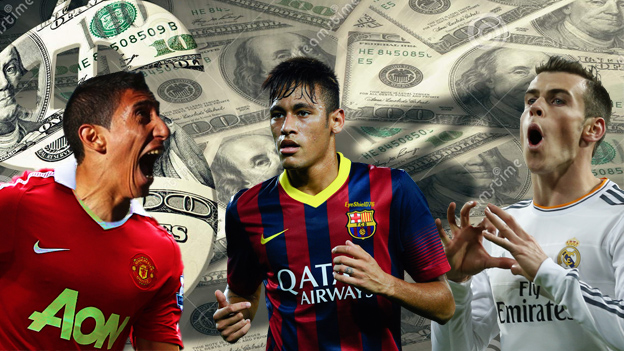 Finishing the transfer market we found that three of the seven most expensive signings in football history belong to this summer. The 81 Suarez million, the 80 James Rodriguez or 75 Di Maria has been the spearheads of a hectic summer season that led to European clubs to spend more than 1000 million euros among the four major European leagues and that leads us to remind wonder if there really is the "financial fair play" in the world of football.

And it should be remembered that many years ago UEFA had the bright idea to stop uncontrolled spending of clubs and pushed through this economic fair play project which came into force in 2011 . But, What is it?, what does it consist of? It is actually carried out or is a toast to the sun new European body?

basically, the "financial fair play" is one rule that forces clubs to not spend more on players than they earn through gate receipts, transmission rights, sponsorships and marketing. The aim is to prevent wealthy presidents (there are cases of PSG, City o Chelsea) distort competition with market signings coming off a failed money through the football industry.

The 10 most expensive signings in the history of football

Technically speaking the system is based on three basic pillars that must be met:

1- Clubs qualified for UEFA competitions contest must demonstrate that they have no outstanding debts with other clubs, with his players or with tax authorities. If they do not, They are subject to a monetary fine, they are punished or are athletically away from European competitions as already happened to Mallorca or Rayo Vallecano without going further.

2- Clubs can spend up to five million euros more than their income for a period of assessment (three years). However may exceed this level up to a certain limit as long as it is covered by a contribution / owner direct payment(s) club or a related party. The limits are: 1) 45 million for seasons 2013/14 Y 2014/15; Y, 2) 30 million in 2015/16, 2016/17 Y 2017/18. The following year the limit will be lower, although the amount is not defined. To promote investment in stadiums, training camps and youth development, All these expenses are excluded from the calculation of breakeven.

3- Within the financial fair play regulations clubs are required to disclose information about ownership arrangements by others and any benefit from these agreements becomes effective when the player is sold. UEFA has asked FIFA to ban this worldwide.

But as often happens in these cases not all are equal before the law and the law is perfect. Without going further, We have seen how Real Madrid, Barcelona and Atletico have spent in Spain more than you have entered. Curious is the case of the Catalan team (if you can not properly sign in 2015) He has paid almost twice what you have entered. 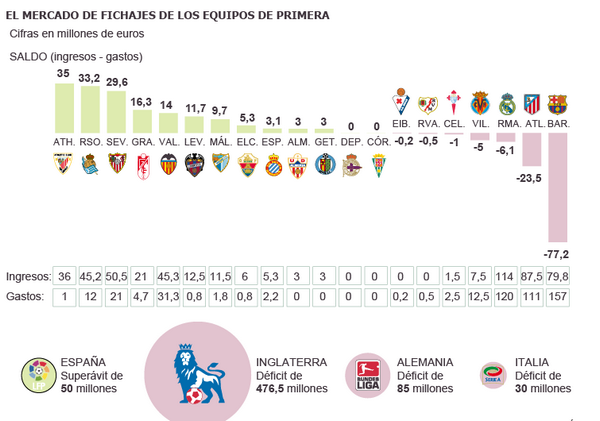 This have entered and spent the clubs first. Infographics El País.

This not to mention the Premier where so little sanitized clubs like Manchester United and Liverpool have left 193 Y 151 million euros based on multimillion-dollar contracts that have led the Premier to spend 476 million more than he has entered transfers.

While it is true that in Spain 13 clubs have made profits on their balance sheets purchases-sales, the "financial fair play" is still significant gaps and challenges magnos measured: How can teams like Valencia or Atletico Madrid in real economic failures can spend 31 Y 111 millions of euros? Why some are allowed some things that others do not? To what extent is limited so new computers may appear in the elite of world football in his day were the Parma, Deportivo or the same Villarreal? What is not a small club can earn the arrival of a billionaire patrons to take you to the world summit and make happy his few followers? Enigmatic questions that have no answer ... for now.