Santi Aragon that goal against Barcelona in 1990 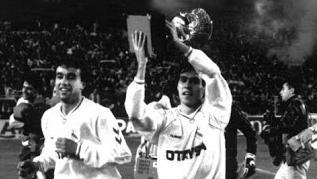 Remember the goal by Santi Aragon against Barcelona in 1990?, Do you remember who was the midfielder raised in the quarry of Madrid then triumphed in Zaragoza?. Football decades ago was very different from what you know and title as the Supercopa of Spain, It was played at the end of the year. We put ourselves in position and moved to December 1990. Second leg of the Supercopa faced Real Madrid Champion League season held 1989/90 against FC Barcelona champion of the Copa del Rey this season.

The match was played at the Santiago Bernabeu, and there came together the likes of Michel ,Hugo Sanchez, Vulture and iron against Laudrup, Zubizarreta, Alexanco, Bakero, Koeman, Stoichkov and Julio Salinas. The coaches of both teams two of the best players ever, Real Madrid, Don Alfredo Di Stefano for Barcelona, Johan Cruyff. But the big star of the night was going to be a very young player then called Santi Aragon, which would mark a real goal that stay forever in the retinas of football fans, whether on a computer or another. Watch and enjoy.