Top Stories World Cup Uruguay 1930. The "father" of the World Cup, French Jules Rimet, who he had been a lawyer, football referee and sports leader, He was appointed president of FIFA 1921. Since 1924 He had formed a commission that was intended to verify whether there were conditions for creating a world soccer competition outside the Olympics.

He had to overcome many drawbacks, including the withdrawal of British federations FIFA, at that time considered to be "teachers". But nevertheless, its momentum and succeeded in holding decision agreed at 1930 an "open to all federations selections associated competition".

Finally, it was decided to organize the first World Championship in 1930 to Uruguay. The decision had many basics: the two triumphs of the "blue" in the Olympic Games 1924 (Paris) Y 1928 (Amsterdam), at the time the only manifestation that could be considered "global" football, which he gave the Uruguayans an extreme close level.

Decisive headquarters, a trophy was needed to reward the champion of competition. Made of solid gold, half 30 centimeters tall and weighed 1.8 kilos, although including marble base, weighed about four kilos. The trophy would be assigned to the champion on duty, I would stay for four years, until the conclusion of the next tournament. Also it stipulated that would become the property of the nation that won the World Cup three times.

the poster was also created for this first world. A curious detail: The cartel originally kept the scheduled dates for the beginning and end of the world, 15 July to 15 of August. Finally, He gambled of 13 al 30 of July, but the poster did not change.

With two months to its opening, set for 13 of July, no European country had reached the FIFA your enrollment request. Jules Rimet had to carry out an arduous diplomatic efforts to convince at least four nations of the old continent, Belgium, Romania, Yugoslavia and France, whereby the "global" nature of the deed was assured.

an odyssey crossing the four European teams to reach Montevideo. First, the train ride to get to their respective port of embarque.¿Entrenamiento meanwhile? As you can see in the picture, Romanian taken computer, It was basically gymnastics, obviously, no football.

With all this uncertainty, it was not until the 11 of July, two days before the opening of the World, what, and present the 13 participating nations, the draw was made. Argentina, Chile, France, Mexico, Brazil, Bolivia, Yugoslavia, Uruguay, Peru and Romania, U.S, Paraguay and Belgium were the first participants.

The first World Cup match pitted Mexico and France. It was so Sunday 13 July 1930 at Pocitos Stadium, before an audience estimated at 500 people, They took the field selections Mexico and France to start the opening game of the first World Championship. To the 19 minutes, Lucien Laurent took a ball on the edge of the area and exceeded the Mexican goalkeeper Oscar Bonfiglio. It was the first goal in World Cup history.

The Brazilian team, It was composed almost entirely of players "cariocas", since the only paulista striker was Araken. For this reason regional, the team was relegated super scorer Arthur Friedenreich, at that time almost 38 years, who it is said until the end of his career marked an unconfirmed number between 1,239 Y 1,354 goals.

The selection of Romania was formed personally by King Carol II. He beat Peru 3-1. In this game, It should also be noted that he first expelled from the world, Peruvian Mario De las Casas, by the Chilean referee Warken

The world at one time: and they traveled to Montevideo stadiums members of the Argentina. These vehicles were called "bathtubs"

The 30 of July, It was time to play the final of the world championship. It is estimated that 15,000 Argentines lined the stands of the "Centenario", but they were only half the estimated tried to reach Montevideo, after crossing the Rio de la Plata in many boats of all kinds. When they arrived at the docks, the party had already finished. And those who were fortunate enough to arrive on time, they met strict review of Uruguayan customs officials, because the slogan was that "not a single Argentine revolver must enter Uruguay. 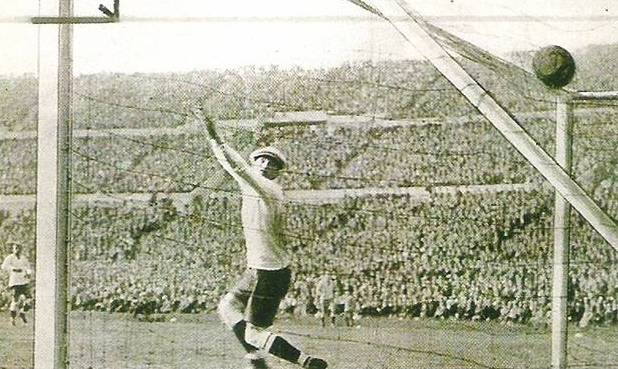 Just three hours before tipoff, the assembly of arbitrators decided that the game would be led by the Belgian John Langenus, who ensured greater guarantees of impartiality. It is said that Langenus asked for a life insurance benefit of his family and passage on a ship that sailed to Europe just a few minutes after the estimated time of completion of the game.

They were different times. Both teams had their respective ball and were not, in any way, willing to accept that the adversary. Langenus made a decision "Solomonic", which it was approved by both captains: the first time with the Argentine play ball and the second ball Uruguay.

The first major scorer in the world was the Argentinian Guillermo Stabile. A Uruguay came on as a substitute for Roberto Cherro, coming home from the match against Mexico, it is said because of a nervous breakdown holder. He not stopped scoring since and finished leader 8 goals.