Matías Dutour, another example of overcoming and football

Many times, the limits of a human being are within oneself and practice of sport helps to overcome. In this sense, football is full of stories and feelings of this kind. As the story of Matthias Dutour, a young Uruguayan who was called to train with National, one of the largest in Uruguay. What it is the peculiarity in this story?, Matias has a birth defect of the elbow below but has not stopped him at least try to fulfill his dream.

Their case, He rose to fame after a documentary Telethon, a foundation dedicated to the rehabilitation of various handicaps. your video, It spread like wildfire over the Internet as a symbol of perseverance and motivation. In ten minutes, reviews his way from small to the testimonies of parents, proud of their son. A journey that has not been as imagine easy.

From childhood, He had to wear a prosthesis something when playing games in the minor categories did not help too. One day, sick of having to donning whenever he came playing a game, He decided to take it away, approaching the fence and give the prosthesis to his father who was watching the game. How could it be otherwise, this would not be any impediment to fulfill his dream.

His call to train with professional equipment and video about his life have placed it as a great example for everyone but is not the only case in the history of the sport. Alex Sanchez, He debuted in the Spanish Primera Division with Zaragoza 2009. His case became famous as Alex, He was born without his right hand, something that did not prevent him reach the highest, where only a chosen arrive, First to debut in such a powerful Spanish league like.

There are other famous cases like Manco Castro and as many more but you can continue reading the article below we tell you some time ago. moment, you can enjoy the video dedicated to Matthias Dutour, another guy who gives an example of overcoming and when you fight with everything he wants, few things can stop it. 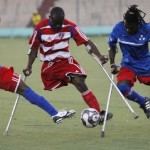