Dertycia Oscar was one of the most characteristic soccer players of the decade of 90's, Few players have been so peculiar or striking as the Argentine striker who played for teams in Europe as Fiorentina, Cádiz, Tenerife and Albacete. Football fans, they could remember playing in the Canary group that stole the league to Real Madrid twice in a row, but the truth is that everyone will remember for his physical quirky, he made himself worthy of his charismatic nickname. And it was in Cadiz, in his first team in Spain, where they began calling “Mr Proper”.

Oscar dertycia, Cordoba, Argentina, 3 March 1965, He played between 1982 Y 2002 a total of 535 matches, spread among a lot of teams in Argentina, Italy and Spain among others, marking the not inconsiderable figure of 212 goals. He became international with Argentina, competing 18 parties and marking 2 goals. When he is playing in Italy, Fiorentina, He was injured and had a problem with medication, which it caused a nervous alopecia, Dertycia leaving no body hair, including his eyebrows and his head. When he arrived in Cadiz to play there, Cadiz fans, faithful to the “banter” It characterizes these lands, he was dubbed with the nickname “Mr Proper”.

Quarrelsome and guerrilla, Dertycia was a nuisance for opposing defenses that surprised with its power and ability to finish career. It was virtually an idol on all sides where it was mainly in Tenerife where possibly lived the best moments of his career as a professional soccer player and spent three seasons in which he delighted chicharreros fans in the best decade in the history of canary club. Argentina completed in good numbers also, especially in Cordoba and Instituto Argentino Juniors. It passed through Chile and ended his career in Peru, and in the new century and beating as he knew.

At present, Dertycia lives in a small village in the mountains of Cordoba, Argentina, San Antonio de Arredondo called, a 45 kms from the capital. As they say, there is a room where you keep the memories of his golden days as a footballer and where he keeps using the same Dertycia, more of 120 Tshirts, including one of Guardiola.  Former Argentine player, He even declared in an interview that encouraged looking T-shirt given by Pep Guardiola Barcelona , when you have a bad day or a bad mood. He founded an NGO called "Cordoba Football Foundation" which is a shelter for former players and has been seen by some acts of Tenerife. Mr Proper, one of the most striking players, peculiar, charismatic and remembered for many who were in childhood or adolescence at the time. 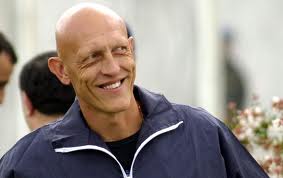