Ivan Zamorano: arguably the best player in the history of Chile 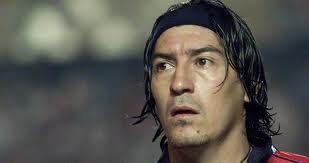 born on 18 of January of 1967, soon he begins to demonstrate their ability to pierce the rival networks did in his homeland where his career began. Their good work during his first professional seasons, They did that in just three years make the leap to European football, specifically to Bologna, which it was sold in 1988.

Zamorano signed for Real Madrid in 1992

He did not play in the Italian club since he was loaned to Swiss ST Gallen, where after some great performances, It was bought by the Swiss club that would remain two seasons, until 1990.

In Switzerland, “BAM BAM” and he continued beating people after scoring 37 goals in the Swiss league was signed for Sevilla, specialist often profitable signings. Sevilla played from the 90 al 92, It is one of the front reference Spanish league, which would bring him to sign for one of the all-powerful world football; The real Madrid.

Zamorano, he remained for four seasons, since 1992 until 1996, which she would have its good and bad times, but where it would be forever remembered as an idol for the demanding Madrid fans. During his first season, Ivan scored goals, but the second, of 1993-94, He had a drop in performance, leaving his only season 11 goals.

Jorge Valdano declared transferable upon arrival in 1994 with a newcomer Emilio Amavisca. Life things, no team was interested in them enough, which he made both to stay at Real Madrid.

This was possibly one of the best things that happened to the Bernabeu team in its history, Both players were the stars of Real Madrid, he regained his throne in the league after 5 seasons. 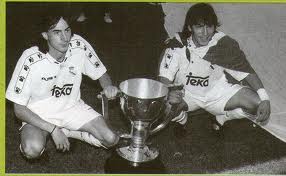 In 1996 he went to another big European football, Inter Milan. There began the decline of his career. While he remained for five seasons his numbers were discrete scorers, often acting as substitute.

The oddest thing was what happened with his back during his stay at Inter. Nike brand, Ronaldo and sponsor of the club, demanded that this take the 9 in its zamarra, which at that time he had Zamorano.

While in his first season at Inter, Ronaldo had taken the 10, in his second, since they were trading a Nike boots with the nickname R9.

Zamorano then, chose the 18, which he put more in between, forming an original 1+8. Then he went to Mexico where he remained for several seasons in the American and ended his career at Colo Colo where he retired in 2003. 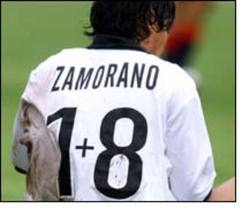 The 1+8 Zamorano wreaked havoc and was at least curious

International Chile, was mundialista in 1998 forming a lethal pair with another Chilean football derby, Marcelo Salas. He was also bronze medalist in Sydney 2000, where he scored 6 goals. Throughout his career he scored 348 goals in 665 matches. Surprising that despite his short stature (1,76) got to have that lethal header that characterized him. He also had an amazing ability to finish with both legs. Temperamental and punchy, Ivan Zamorano was one of the great strikers in world football for many years.

Valencia players who went from hero to villain
The biggest teams ever won a European title
The worst signings of the season so far
Juanma Lillo, the eternal promise of Spanish coaches
The Mexican team that returned the ticket money after losing a match
The best goalkeepers in the history of Atletico Madrid
Who has been the best coach in the history of Mexico?
From the brink of death to head in Russia 2018
Big Ten pufos in the history of the Spanish League
How was the football 1965?