Lima's National Stadium is the new wonder of South America

Hanged for football today we discover the essence of Peruvian soccer on a journey that takes us to the National Stadium in Peru, It located in the capital, Lima. This scenario has become one of the most modern stadiums in the world after a series of works which ended with the new enclosure reopening last July 2011.

Originally built in 1952, at first he was born with the idea of ​​replacing an old stadium also called “National” which hosted major sporting events in the country. This and the limited capacity of the enclosure, It prompted the President of the Society of Charity of Lima, Luis Dasso will sponsor the construction of a new stadium with increased capacity and bring it into line with the surge of large buildings.

It was like this, As the 27 October 1952 Lima's National Stadium was inaugurated with a total capacity of 55.000 viewers. also known as the “Colossus Jose Diaz” being in an adjacent street that refers to the Argentine military nineteenth century, in 1953 He lives his first big moment in hosting the America's Cup. He would win a championship Paraguay to Brazil, in the first participation in a major competition with Brazilian yellow dresses.

Four years later, shelter his second America's Cup, with victory this time Argentina, again against the Brazilians. already 1959, The stadium would live a historic milestone by hosting the largest capacity of fans in its history (50.306) in the friendly against England, which he ended with a resounding American victory 4-1,

Definitely, the worst Stadium will live on 24 May 1964, in qualifying match for the Tokyo Olympics. More than 47.000 People following the decisive match between Argentina and Peru, a goal disallowed with just two minutes remaining in favor of the 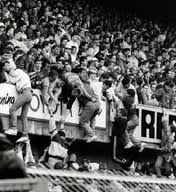 Local prompted one of the largest massacres that have been on a football field.

A spectator jumped onto the pitch pnow assaulting the árbitro, after which the police released the dogs pounced on the fan who had jumped into the field. This image caused an attack of mass hysteria and people who until a few seconds were friends and were sitting next to each other quietly began to fight all against all.

Police overwhelmed by the battle that had formed unsuccessful attempt to stop the battle with tear gas, this situation 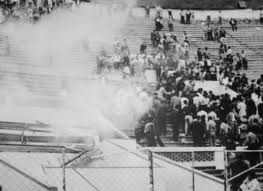 also it helped the north stadium gates were locked out impossible people. The event ended with a total of 328 dead, thousands injured, and new security measures that led to the stadium reduce its capacity to 45.000 people.

In the years 70, field history would come marked by the two finals of the Libertadores (at 71 the tie between Nacional and Students, and the 72 the first leg of the final between Universitario de Lima and Independent) and South American U-20 1975, in addition to the brilliant performance of the national team in World Cup qualifier 70, appointment where Peruvians managed to reach the quarterfinals.

Years 80 Y 90 They would not be the best for Peruvian football. But nevertheless, The stadium was pleased to be able to observe in the field the likes of Zico, Socrates, Maradona, Francescoli and others who joined Pele past, Tostao Garrincha.

It was not until 2004, when the National recover the path of prominence, with the reception of a new edition of the America's Cup, which would have its culmination with the excellent final starring between the two classic South American football, Brazil and Argentina, Brazilian victory that would end on penalties after finishing regulation time and extra time tied at 2 goals.

The Monumental de Lima is the largest stadium in the country

The recent history of the stadium has been marked by the major refurbishment that has suffered the stadium, what has caused the Peruvian team had to play their qualifying matches for the World 2010 in the colossal Monumental Stadium Universitario, with capacity for more than 80.000 viewers. A damn stadium for the Peruvian team has managed to win for only three of the fifteen matches in it.

Finally, last July 2011, The stadium was reopened completely remodeled. A friendly between the Under-21 national teams of Peru and Spain welcomed the National Stadium, recognized as the best venue throughout the country and also one of the best in South America.

With the new reform, The stadium has 46.800 seating, and it is connected through the sport MALL, with the other major sports stadium in Lima, Alejandro Villanueva, better known as the Matute, Or what is the same, Alliance House Lima.