England, Can you talk about favorite team?

England does not appear in any betting favorites for the next World Cup in Brazil. Normal if we consider that the champion 1966 He has never gone beyond the quarter 1990 and that 1966 and accumulating failure after failure in recent championships. But nevertheless, beyond that, It should have respect and a lot of British.

A team that brings together Lampard, Gerrard, Rooney, Welbek, Sturridge, Hart or Cole could explode at any moment and perhaps, Brazil, the last chance for many of them, it can be the place where it occurs. It is true, the group of death, Uruguay and Italy with more powerful rivals does not help them but does not seem logical to underestimate the level that many do.

England with Hodgson on the bench bet to play on the counterattack, by fiarlo all a fearsome front, a midfield with plenty of arrival. But nevertheless, He will always have the lamentations. Problems in defense and especially, play in building. It will cost you carry the weight of the game, but against tough opposition, maybe that's a relief and allow him to develop his scheme.

It is unclear even what the real objective of English for Brazil, but if you stick to recent friendlies against Chile and Germany, we can see how the British seem to be a step below the major powers. True or false? Brazilian lands will be responsible for confirm. 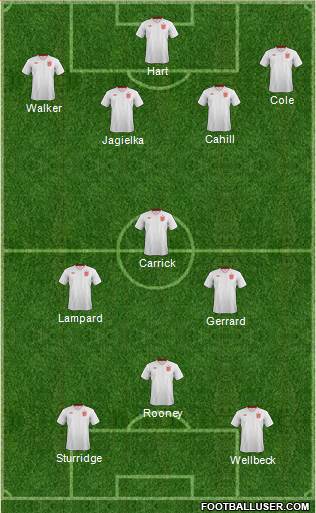 Roy Hodgson is a globetrotter football. Knower of up to seven languages, and he led away to Switzerland in 1994 until the alighted Spain. This has the advantage of knowing some players who spent many years being measured in the Premier. But nevertheless, Hodgson there is something that worries beyond his extensive experience leading many teams.

Its ultra-defensive character selection. England should play offensively with good players who have, be strong and look of goal. Hodgson prefers otherwise. Kickback and wait rival. tough challenge, more demanding and hopeful audience to finally see the creators of football to play well.

– Twice a semifinalist of Euro.