Holland 74, the “Mechanical orange” which brought the total football

Why Holland of the 74 was called “The Mechanical orange”? Because they invented the forward pressure, because they played with ends, because the whole team attacking and defending at the same time, that revolutionized the pattern of existing game so far, because they were pioneers not put a 9 pure, because they swapped positions on the field no matter if one was forward or defense, because they did not win but they played like angels, but mostly…because they fell in love with the world of football in years 70 Hanging by Fútbol could not ignore giving a wink to this legendary team.

Rinus Michel, the father the Holland of the 74, Clockwork Orange

Commanded on the bench by a certain Rinus Michels and captained within the lawn by one which Johan Cruyff, Modern football owes much of its origin to this wonderful Dutch team that wowed the world in the World Cup 74 and he has served as a source of inspiration for great teams in the past 30 years.

Without a doubt, Michels was the father of all this footballing framework that led the Netherlands to a World Cup after that 1938 I did last time. For it, the “General·- He was known as- He applied his style, its forms, that hardness that so good result had given him on the bench Ajax (1965-71) and Barcelona (71-75).

As if it were a paper in the style of Clint Eastwood, Michels was a true iron sergeant pivoted bases its approach on three pillars:

– physical condition. Football is pressure, touch and movement and it is essential to be in good shape. The days became long and heavy. The body had to be prepared for battle, because as he said “football was war”.

– talent and class. The rapid movement needed football players touch the ball one-touch, no time to think defenses. In a few seconds, the ball had to be in the attacking half, but all this without ever losing control.

-. tactical rigor. Each player had to be comfortable anywhere in the field. A key exchange positions was, Unlike catch the unwary, Imaginative be, and nothing better for that than tactical awareness.

The Holland 74, a total team

He was recognized as the same in “harass without rest or respite to the adversary to recover the ball, and not give in at any price initiative attack opponent, having two basic requirements: a spirit of unyielding struggle and a perfect physical preparation, without which the system collapses irretrievably ". 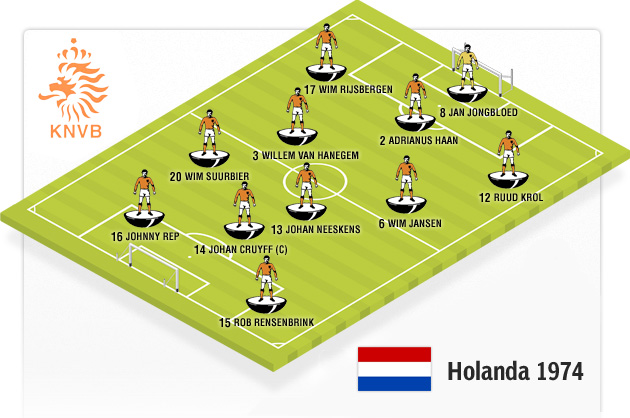 They dazzled at the World Cup in Germany 1974

New approaches all that as expected soon bear fruit. Holland went from being nobody in the international arena to cover one of the most brilliant periods of its history in the World Cup. Under the baton of quality men like Johan Cruyff, sour Beer, Krol, Neeskens, Haan, Jansen, Rensenbrink o Rep, Van Hanegem, tulips gave the big blow in the German championship.

There shocked the world on his debut against Uruguay. The two-time champions of the world could barely pass twice midfield before the game and Dutch avalanche of opportunities that could have ended in a shocking rout in the absence of bad luck. The feeling of lack of control that seemed to reign in the numbers of “orange” (where the doorman Jan Jongbloed I use the 8 and forward Rud Geels the 1 ) for nothing corresponded with reality.

After a draw against Sweden (0-0) and win Bulgaria (4-1, Holland would beat the big jump in the second stage of the tournament, which it was played in a league of four teams in which he played the final champion.

In the second part of the World, Holland opened with a spectacular win against Argentina by 4-1, which he was followed by a convincing victory 2-0 to the Democratic Republic of Germany. Brazil, the great Brazil but without Pele, It seemed to be the last obstacle on the road. comfortable 2-0 He removed the last stone of the way and put the team in the final.

Germany, the other, the Federal, the correct, He expected in the last game for glory. Maier, Beckenbauer and Müller were among the rivals to consider. The match of the Dutch was worthy of a world champion. They removed the center and, without the Germans arrived to touch the ball, the “orange” they approached the area and there was Uli Hoeness brought down Cruyff by being subjected to a penalty that Neskens transformed into the first goal of the game when the Germans had even touched the ball.

When everything seemed more orange paint pink, Breitner y Torpedo Müller They turned the game around and ended up with a dream that never came true but that will always remain in the memory of all fans. And it is that there are shots to post prettier than a lot of goals.

One thought on “Holland 74, the “Mechanical orange” which brought the total football”