Italy, as usual with the usual and Balotelli

Appears in group D Italia on stage. He does it in a tough group, the only one that brings together three world champions, with Uruguay and England as colossi to be measured. After the failure of the World Cup 2010, Italy will try to look like the one that just two years ago managed to be a finalist in the Eurocup in Ukraine and Poland.

For it, Prandelli will have the usual weapons. A good defensive framework, Buffon's safety under sticks, Pirlo's creativity and a plus that Balotelli always ensures. The Milan striker must be the guide of a team that wants to touch the ball more, be more offensive and get rid of that image of a defensive team. Mimbres for it has to spare, Cassano, Rossi, Inmobile, Balotelli himself, Pirlo, Monteolivo, there is a lot and good to choose from.

The road has placed many stones along the way, but it would not be the first and last time that Italy comes out of worse things. Who does not remember his first phase of Spain 82 or United States 94? The transalpinos are always dangerous and English and Uruguayans will surely not be happy to have them in their group.

Where will they go? It's a mystery. No one places them as top favorites or even as favorites at the height of Germany, Argentina or Spain, but still nobody discards them. We know, where least expected the hare jumps, and in World, Italy usually wears lambskin hiding the real wolf that later is. 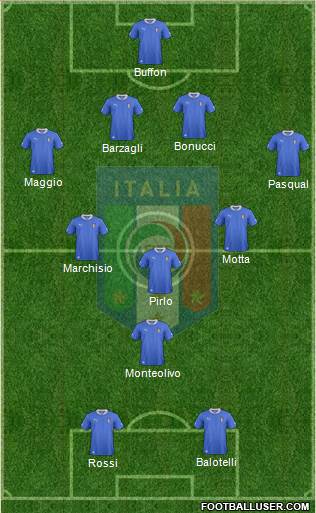 Cesar Prandelli will be in charge of looking for Italy to win their fifth World Cup. Complicated company but see some light after a great European Championship where Germany was charged in the semifinals. Prandelli gathers defensive solidity, but in addition to that, he is a coach who seeks to dominate, something rare to see in Italian football. A) Yes, it will not be difficult to see Italy take the reins of the game against England or Uruguay, two selections that prefer to be folded.

Prandelli has not won anything as a coach but his five years at Fiorentina leave a great legacy in Florence that he will now try to enlarge with the Azurri. Complicated challenge, without doubt.