Comes one of the best coaches in the NBA as Doc Rivers, one of the main reasons that led to Chris Paul to stay on the team, It will be another year the undisputed star of the team, and will feature luxury squires like Blake Griffin or Jamal Crawford. It has been reinforced with good players to form a great roster. Lots of new faces like JJ Redick, Jared Dudley, Darren Collison, Antawn Jamison o Byron Mullens, that added to those who were already like DeAndre Jordan and Matt Barnes make up a great squad. It seems that this year may be the season in which they can finally really aspire to the ring, although they will have tough rivals in the western conference like the Thunder, los Rockets, the Warriors or the Spurs.

A) Yes, our bet for the starting five will be: Paul, Redick, Dudley, Griffin y Jordan.

Exciting season that is presented at the Oracle Arena. After last year's great season, the team got rid of those players it did not have like Biedrins and Richard Jefferson, thus freeing salary space to hire André Iguodala. A great signing for Mark Jackson, very complete player who will fundamentally contribute defensive intensity and experience. Veteran players also arrived for the paint such as Speights and Jermaine O'Neal, that will be important to rest Andrew Bogut, who seems to have left his ordeal of injuries behind. Two big names like Jarrett Jack and Carl Landry left the team. Sophomores Bazemore and Draymond Green are also expected to get more minutes this season..

The team will have a quintet formed by Curry, Iguodala, Barnes, Lee and Bogut, leaving Klay Thompson as sixth man.

Directed again by the discussed Mike D'Antoni, that he will have to find the key that he did not give last season in a summer marked by the departure of Dwight Howard heading to Houston. further, Kobe Bryant continues his recovery process and will not be ready for the start of the season, although it has been shortening deadlines and it seems that it will be available sooner than expected. Before the exit of D12, Kupchak moved quickly and took over the services of the German Kaman, experienced center with good numbers in the league, who will form an inside pair with the Spanish Pau Gasol. In addition to kaman, more reinforcements have arrived like Nick Young, Xavier Henry or Jordan Farmar's return to LA, who will have the mission of replacing Kobe until his return. Other important men on the roster such as Jamison and Metta World Peace have also packed their bags..

The starting lineup will consist of Nash, Young, Henry, Gasol y Kaman. All this always subject to the return of Kobe.

but he has the speed and athleticism to get to the rim.

Summer of many changes that has been experienced in Sacramento. Shaq has arrived at the Arco Arena after becoming a minority owner of the franchise, motivated in part by the presence of Demarcus Cousins, who reminds him of a younger version of himself. Regarding transfers, many new faces have arrived to the template. Greivis Vásquez arrived from New Orleans in exchange for Tyreke Evans. The Venezuelan had a great season; will share the point guard position as Isaiah Thomas. From the draft came Ben McLemore, a scoring guard who comes with a great poster, and that will be a priori one of the candidates for the Rookie of the year. Finally, we must highlight the signing of Carl Landry, veteran center who arrives from free agency and who made great performances with the Warriors, and from Mbah to Moute, coming from the bucks. They will all join the Thorntons, Thompson, Patterson or Fredette, and they will be led by a newcomer like Mike Malone, who was an assistant to Mark Jackson on the Golden State Warriors. The 2013/14 It will be a transition season for the Kings, in which they will not be able to aspire to the playoffs and will fight to get as many victories as possible.

The starting quintet will be formed by: Gravey, McLemore, Mbah a Boute, Thompson y Cousins

but he has the speed and athleticism to get to the rim.

Without changes of too much importance, another debutant arrives on the bench, former Utah Jazz shooting guard Jeff Hornacek. And as for the squad, names like Eric Bledsoe have been added, Gerald Green or rookie Alex Len. The team leader will once again be the Slovenian point guard Goran Dragic, who has just done a great Eurobasket with his team, and will be accompanied in the painting of the polish hammer, Marcin Gortat. The one who will not be is Scola, who has gone to the Pacers in search of fighting for the ring. Bad expectations in Phoenix, with the consolation of being in the low positions and aspiring to a high selection in the draft of 2014, from which much is expected. 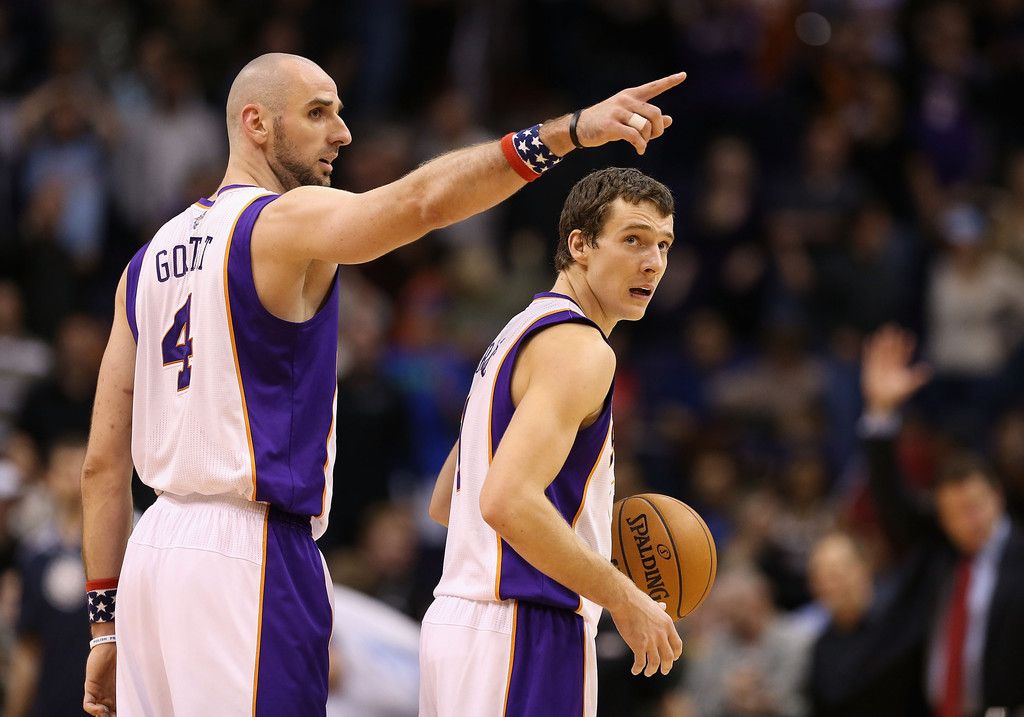