Sir Bobby Charlton, one of the greatest football legends of the twentieth century

"I played 21 years in a row for Manchester United and I never had an injury, I think I was lucky. "The author of the phrase is no more nor less than a living legend of world football: Sir Bobby Charlton. 105 international with England (the second most after Peter Shilton) and top scorer “pross” with 49 targets, this man, survivor of the Munich air tragedy great embodies all possible values ​​that Manchester United can transmit: passion, pure football, sportsmanship and a long history behind it.

A legend of British football

Born in 11 October 1937 en Ashington, he was the person who once appointed as Old Trafford “Great Theater of Dreams”. Known for its extreme speed and great ability to dribble and pass -better said assistance Goal-  his principal characteristic, However, He was to score as many, for even 249 He succeeded in 758 appearances for United (top scorer). all, for a player glued to the band in its infancy, but gradually he ended up playing in midfield.

Signed for Manchester 17 years, it was not, but nevertheless, until he was 19 when he debuted with the first team. ran 1956 and it was to be the beginning of an unparalleled career. Not in vain, would be many years Charlton happened at the end of the “Red Devils” with those who get three league titles and one Copa.

Precisely, the last of his league would be allowed to participate him in one of his great achievements as a footballer, the European Cup 1968, where such George Best and he would form a dream partnership that would allow them to conquer the Orejona after winning in the semifinals Real Madrid and Benfica razing of Eusebio at the end of Wembley. Match, where Bobby Charlton sign a mythical double.

Even though, definitely, his great title would be achieved two years earlier in the World 66. Wembley again he would succeed, but this time as 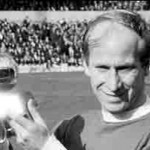 World Champion, winning England 4-2 To Germany (“England beat us 1966 why Bobby Charlton It was a little better than I” were the words of Beckenbauer after the match). An achievement that would allow him to get the Golden Ball 1966 and win over English fans for the rest.

Nephew of the great Newcastle striker Jackie Milburn, and family up to four professional footballers, He would give his last steps in the Wateford United in the campaign 1974-75. It would be the epilogue to a golden career, which would allow in 1974 get knighted. Without, certainly big words, for one of the greats of football history.