The ten most expensive teams in the Copa Libertadores 2015

Copa Libertadores is the South American equivalent of the Champions League. The tournament where the best teams on the continent face each other to prove who is the best team in America. Thus, the clubs, reinforce their workforces to try to assault one of the most prestigious tournaments in the world. Because, in Colgados, we look at who are the ten most expensive teams in the Copa Libertadores 2015 with some details as less indicative, four of the top five are Brazil. Of the 10 first, 5 Brazilians are, 4 Argentine and 1 Mexican.

The Brazilian club has the most expensive Copa Libertadores template with a template valued at 72,3 millions of dollars

Brazilian team in the League Cup this classification. Sao Paulo with 66,3 million dollars is the second most valued team in the Libertadores.

Ronaldinho's former team ranks third with a squad of players that costs 58,1 millions of dollars.

In 52,1 million dollars template players one team with more followers in Brazil is assessed.

The Mexican team is the revelation of the Copa Libertadores and has one of the best hobbies in the world. Its staff is the fifth most expensive in Libertadores, 51,2 millions of dollars.

Millionaires as it is called the Argentine team also are in the Libertadores with a standard template 50,2 millions of dollars.

Another Brazilian team sneaks between 10 top of the list. International features a valued template 49,8 millions.

Another Argentine is among the ten most expensive teams in the Libertadores 46,6 millions. Those of the Bombonera, They are one of the largest in the continent.

Argentine fourth and tenth on the list is Racing de Avellaneda with a budget of 34,9 millions.

Notably, the most expensive player in the competition is the Argentine Osvaldo, Boca arrived from Southampton English and is worth about 12,5 millions of dollars. This studio, It was conducted by Brazilian consulting firm Pluri the determined that these were the 20 more expensive equipment. 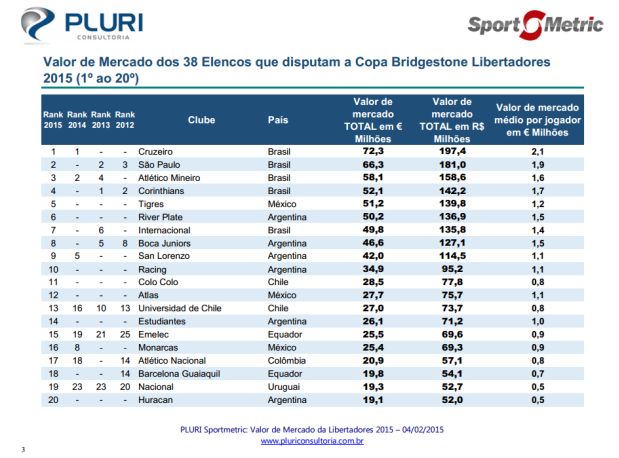