In 1996, Germany was a formidable team. Trichampion the world, England proclaimed European champion for the third time in its history. Today, Germany, It remains a formidable team but less. The reason? He has not won a major tournament since. Finalist in the World 2002, semifinalist 2006 Y 2010, European Championship finalist 2008, Germans give the post but did not put a goal. Of fame born winners to losers usual.

Indeed they have regularly, but they always meet 18 years without winning a major title is much. This time, in Brazil come as favorites. Players have to give and take. Ozil, Gotze, Kross, Müller, Bastian Schweinsteiger, the list of talented players is spectacular, especially in midfield, Spain where he discussed the fact of having the best batch of gamers the world.

Centrocampismo but also defense and attack, because this Germany is very complete. The goal is covered with Manuel Neuer and Marc-André ter Stegen, two of the best goalkeepers in the world. In defence, Mats Hummels, Per Mertesacker and Philipp Lahm Formana behind an experienced and full quality. Midfield is all said. variants, versatility and choice arrival, creation or pure talent. The attack is perhaps the weakest line. Klose, their 35 years still ensures goals, but age is taking its toll and it's hard to know how to hold up a championship like this. Mario Gomez has exited from injury is unknown.

The aim can not be other than winning, but also you want to amuse Low. In the path, Brazil appears on the horizon of the semifinals, before quartered, perhaps France, provided they meet in a group for easy to Portugal, USA and Ghana. 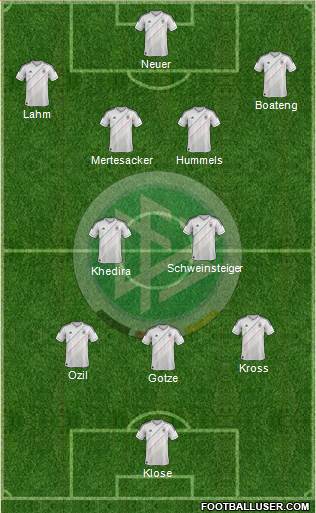 Joachim Low will be in charge of trying to give Germany its fourth World Cup. The German and headed Teuton combined in the World Cup and everyone knows what your bet. offensive game, cheerful and touch. The idea of ​​playing as Spain is increasingly present in Low, which nevertheless has more variants. The organization, the air are also essential in a coach who seek to block a gun.

moment, although the results have not accompanied him with a great title, it can be said that at least has managed to change the mindset of the team and his play. Something unthinkable years ago.