USA, the “Soccer” It has much to say

Few know that the USA participated in the first World Cup in history, that of 1930 held in Uruguay. Surely, not many will know the story of the USA's machada in the World Cup in Brazil, but of 1950. The “Soccer”, as soccer is known in the US it seems like a relatively new fashion, of recent decades but the truth is that it has been present in the giant American country for much of the 20th century. As it is also true that his progression in recent years has been spectacular.

Great players like Pelé, Kaiser, Chinaglia, Eusebio, Cruyff or George Best went to finish their career in the NASL, the North American soccer league of the 70's predecessor of the current MLS created for the USA World Cup 94. Although it is true that among the 80 and the 90 there was a void, from the World Cup in Italy 90 to the present, He hasn't missed a single World Cup event, being already a classic of the great event of world football. Next summer's event in Brazil will be his tenth World Cup participation, the seventh in a row.

Framed in a group where the first two places seem a priori for Portugal and Germany, the North Americans, they have much more to say than meets the eye. With the bulk of the team playing in Europe, USA, It has players with talent and experience in the elite. Players like Howard, Dempsey or Altidore have a long journey in the Premier alongside the talent of Landon Donovan, the star of the team and with experiences also in the prestigious English league and the Bundesliga. In the ranks of the USA, the large bulk of players of Mexican origin stands out.

no pressure: despite winning easily in the CONCACAF zone, nobody expects a priori that the Americans will go further than the round of 16. They can give more than one surprise.

block fortress: Klinsmann has assembled a good block. Throughout the qualifying phase they have shown strength as a team, especially in home games where they have not given up a single point.

Inexperience: some of their players have not participated in major tournaments or come from the MSL, a league today of lower level.

short insole: The USA has several quite interesting players who combine experience and quality. But nevertheless, the level of its second row is quite far from the first. 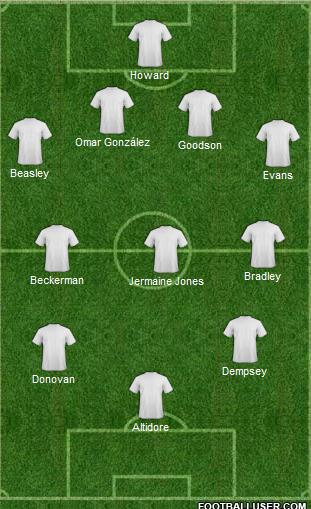 Jürgen Klinsmann was one of the reference strikers at the end of the 80 and early 90. The German, He was world champion as a player in 1990, a milestone that seems distant that he repeat as American coach. Despite the doubts that aroused at the beginning, the easy qualification for the World Cup, victory in the Gold Cup and a record eleven wins in a row, have changed the vision of the German coach who seems to have won over the North American fan.