Iran, not as adept at sweet as it seems

Iran attends the World Cup in Brazil for the fourth time in its history. He does it with the aim of overcoming his previous performances where in no case of the round of 16. It will not be easy. With Argentina as head of series, between the “Princes of persia”, Bosnia and Nigeria embark on a titanic struggle for second place. A priori, It may seem that both Africans and Europeans have an advantage, but if we do an in-depth analysis everything turns out to be more equal than it seems.

Because Iran is more powerful than other times. It is no longer that weak team, fragile in defense that grants many facilities. Now it's more serious, better organized and with a touch of talent that other times I did not have. From the hand of Carlos Queiroz on the bench and the eternal Javad Nekounam in the center of the field, Things have changed. Iran has grown.

Of course, we won't see her dominate, but go against it, the one with which he destroyed Korea to win 0-1 and secure a fourth pass to a World Cup. Jabbari and Ghoochannehjad are excellent attacking add-ons and the 4-5-1 that the Portuguese coach will use the greatest guarantee that Iran seeks to take center stage.

Three-time Asian champion, one of its strengths will be knowing how to adapt to the high temperatures that we will experience in Brazil. Their players are highly accustomed to going out onto fields with fired mercury and this can be a great advantage. It is true that Argentina must beat him easily, but neither Bosnia nor the always irregular Nigeria can sleep peacefully. Because Iran is no longer that sweet tooth. 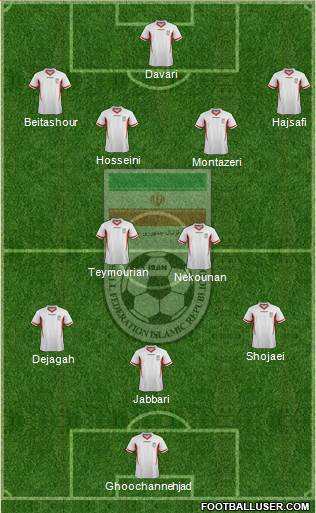 maybe, the best known of Iran is its coach Carlos Queiroz. The ex of Manchester United and Real Madrid is a good lover of touch football and an old dog on the bench. But nevertheless, knows that with Iran things are different.

Queiroz knows that the best way to go far is to tie back and look for a quick exit of the ball. Direct play to the detriment of touch and possession, DNA. Hopefully this time Carlos Queiroz will have better luck than he had in the Arab Emirates and South Africa.